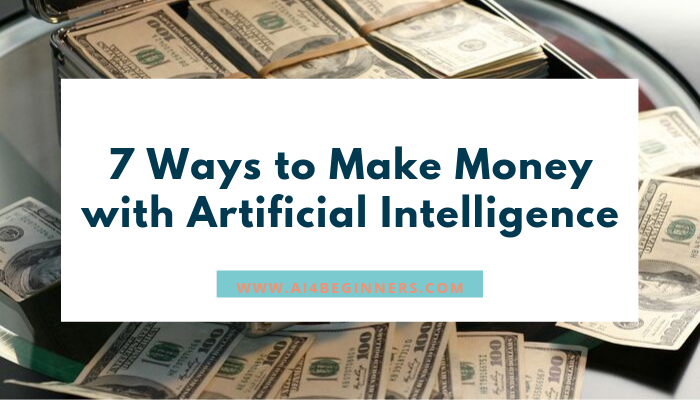 Don’t sit back and watch the intelligent few make all the money with artificial intelligence (AI), now that it’s trending.

Artificial intelligence is currently a hot cake, no doubt. Just take a look at how the search term ‘artificial Intelligence’ has been trending on Google Trends over the past 5 years.

Yes it is. And currently over 86 million people have affirm interest in ‘artificial intelligence’ on Facebook.

The real deal here is that with the amount of people interested in or becoming dependent on artificial intelligence comes opportunities to make a lot of money off the AI trend.

Take a look at how big tech companies are racing to acquire AI start-ups and you won’t need any more convincing to know that AI is the next big thing.

The amazing thing is that you don’t need to have millions of dollars in your bank (in some cases) to jump on the AI bandwagon and start making money with it.

Trade forex and CFDs on stock indices, commodities, stocks, metals and energies with a licensed and regulated broker. For all clients who open their first real account, XM offers up to $5000 deposit bonus to test the XM products and services without any initial deposit needed. Learn more about how you can trade over 1000 instruments on the XM MT4 and MT5 platforms from your PC and Mac, or from a variety of mobile devices.

Now sit tight because in this article I’m going to share with you seven (7) ways you can make money with artificial intelligence.

Artificial intelligence applications (valuable AI Apps) are highly in demand. If you can build one (or more) and market it effectively, you most definitely will be making a lot of money from it.

Now, this may shock you:
You don’t need skill in AI programming to build an AI application whether for Android, IOS or PC.

Have you ever had of a guy called Neil Patel?

Well in case you haven’t, he is a big name in the SEO industry and today, he’s making a lot of money by building SEO applications, marketing them and offering access to them at certian prices without having to build those applications himself.

In most cases, he pays programmers to build the applications for him, markets them and boom, he’s making money for them. In other instance, like in that of UberSuggest (one of my favorite free tool), he acquires the application straight off the market.

You too can do the same, you can hire AI programmers to build an AI application for you, you pay them, market it effectively and the next thing you know, you’re making money already. Alternatively you can also acquire AI applications off the market.

Now, if you don’t have the money to pay programmers to build you an AI application or acquire one, then you will need to be skilled in AI programming that way you can build your own AI applications without having to pay for it.

Ways to make with AI Applications

You can make money from your applications through Advertisement and that’s mostly if your AI applications are available for free. Advertisers are paying millions of dollars to advertise on applications.

You can decide to make your AI application(s) available for a certain price of your choosing, that way people will pay you to use your applications and you could also make it available for free while making users pay for certain features.

Do I seriously mean you should sell your AI application?

You could develop an AI application get a lot of people to be using it and sell it to the highest bidder (or to your preferred bidder).

WhatsApp Founders made a whopping $16 billions dollars from selling WhatsApp to Facebook.

That’s a lot of money. You may not necessarily sell your Apps for billions, that notwithstanding, there’s a lot of made from selling Apps.

2- Start a blog about artificial intelligence

Blogging is old (being around for long) no doubt, but more people are making money blogging this year than were last year.

When you consider the fact that the median household income in the United States is $56,516, according to 2015 data from the U.S. Census, then it’s only common sense to say ‘there is lots of money made blogging’.

A blog about artificial intelligence could see you make a lot of money every month.

With a lot of people interested in Artificial intelligence, you do be missing out by not starting a blog on Artificial Intelligence.

You can make money blogging from so many ways, some of which are through; ads, selling online courses, affiliate marketing, ebooks sale, sponsored post, and running a paid membership site among others.

Imagine if you had invested in amazon’s IPO in May 1997, you do be making swimming in a lot of money now.

The potential of the e-commerce business back then was as glaring as Artificial Intelligence today.

And to think of the fact that artificial intelligence has far more potential today than e-commerce in 1997, it would not be unwise to invest in Artificial Intelligence today, now that it’s stock prices worth less.

Trade forex and CFDs on stock indices, commodities, stocks, metals and energies with a licensed and regulated broker. For all clients who open their first real account, XM offers up to $5000 deposit bonus to test the XM products and services without any initial deposit needed. Learn more about how you can trade over 1000 instruments on the XM MT4 and MT5 platforms from your PC and Mac, or from a variety of mobile devices.

For this one, you will need to be skilled in artificial intelligence programming.

Are you skilled in Artificial Intelligence programming?

Are looking to make some money with your skills?

Have you considered carrying out freelance projects and get paid for it while gaining valuable experience on the job?

I employ you carry out Freelanced AI projects especially if you are looking to start a career in the AI Industry. It’s great way to make quick bucks while gaining valuable experience.

5- Work as an AI programmer/engineer

That’s something you probably should not ignore. According to Datamation the average money AI programmers make is around $100,000 to $150,000 per year.

YouTube for many people is a money making machine, thousands of YouTubers today are making well over $10,000 per month on YouTube alone.

Being a YouTube sensation on the artificial intelligence space is a great opportunity to grab, if you are passionate about Artificial Intelligence and want to make money off your passion.

And you could start a YouTube channel with as little as 200 dollars and stand a chance to make tens of thousands of dollars off your passion.

Two (2) things will work in your favor, if you start a YouTube channel on artificial intelligence:

The ways to make money through YouTube is similar to blogging; ads, selling online courses, sponsored videos, and affiliate marketing among others.

Let me know what you think in the comments below.

Before I say anything let’s take a look at the top 10 richest people in the world as at when I was writing this piece.

Do you noticed that seven of the top 10 richest people in the world made their Fortune by starting (founding or co-founding) a company while three others may be a fortune through investing.

Bezos, Gates, Elisson, Zukerberg, and Larry Page, all started companies around something that was trending at their time. For Gates, it was computer and for the others it was the internet.

Today, that trend is now artificial intelligence, start a Startup around or on Artificial Intelligence and you will be positioning yourself to be among the next Bezos and Zukerberg.

If you want to make crazy money with Artificial intelligence you should be looking to invest in Artificial Intelligence or start a Startup around it; a Startup that may potentially become the next big thing since Amazon and Facebook.

Artificial Intelligence will dominate the world like computers and the internet did. Hence, it’s common sense to say that most of the next sensational Millionaires/Billionaire are going to be people that put their time and money in artificial intelligence.

What ways will you choose to make money with artificial intelligence?

Let me know in the comments below, let’s talk.

Looking forward to hear from you.